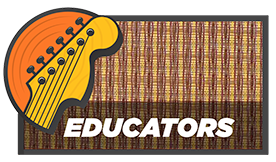 Learning guitar online has never been easier with of the best guitar players in the world offering insightful lesson into their playing style.  Find the best in online guitar education with our comprehensive list of the guitar instructors.  With sites like Learn Guitar Cafe , Truefire,  Jamplay and Artist Works leading the way you will never be short on inspiration and solid instruction. The quality of lessons is top notch with many sites having in house purpose built studios for recording lessons. 4K quality video, backing tracks, animated tablature, downloadable PDfs make the learning process really enjoyable no matter what level you are at.

Considered one of the USA’s foremost guitarists and harp-guitarists, Muriel Anderson is also a gifted educator. She is the first woman to have won the National Fingerstyle Guitar Championship. She is host and originator of the “Muriel Anderson’s ALL STAR GUITAR NIGHT” as well as founder of the Music for Life Alliance, to support music education in schools and grassroots programs nationwide. Her double CD “Nightlight Daylight” is the first to use fiber optics in the package, her original idea, and it has won a dozen national and international honors. Her Heartstrings recording accompanied the astronauts on a space shuttle mission, and her new release “Acoustic Chef” is both an international cookbook and a CD. Holly
Read More
What a great course! Some amazing songs to learn. But most importantly, Muriel warms you up slowly, and builds up your technique as each song goes by. I love fingerstyle, mainly because I've been able to grasp its technique, and especially since working through courses like this one. I highly recommend this, and Muriel - she is an excellenRead more about review stating Muriel is fantastic!t tutor

Stephen Bennett is an extraordinary musician, an acknowledged master of the harp guitar, a challenging teacher, a gifted composer, and a performer of astounding sensitivity. The Toronto Fingerstyle Guitar Association referred to him as “the Jedi Master of Fingerstyle Guitar.” Born in Oran, French-Algeria, in 1957, when France was decolonizing its Empire, Pierre Bensusan’s family moved to Paris when he was 4. He began formal studies on piano at the age of 7 and at 11 taught himself guitar. Influenced in those early days by the folk revival blooming in Britain, France and North America, Bensusan began first to explore his own diverse musical heritage and then moved to the horizons beyond.

Described by the L.A. Times as “one of the most unique and brilliant acoustic guitar veterans in the world music scene today,” Pierre Bensusan was voted “Best World Music Guitar Player in 2008” by Guitar Player Magazine Readers Choice. His name became synonymous with contemporary acoustic guitar genius, long before the terms New Age, New Acoustic Music or World Music were invented. He has the ability to make a single guitar sound like an entire band as he brings the audience on a mesmerizing musical journey. And yet, Bensusan is more than what any musician or music lover expects from a guitarist. He is a composer as well as a bilingual and a brave improvisational vocalist, melding whistles and resonant low notes with something like his own scat technique. Holly
Read More
Pierre Bensusan is wonderful teacher and human. His music is very melodic and beautiful. The course breaks down the tuning of DADGAD, common chord shapes, some of Pierre's background but it is really a wealth of refined technical guitar skills. He provides a deep philosophical context to playing music. He patiently breaks down the difficult techniRead more about review stating DADGAD explorationsques that sound so beautiful

David Blacker is a guitarist, songwriter, music producer, and educator. His playing and compositions have been featured on numerous original albums, national television commercials, TV series theme songs, and radio spots. As a guitarist, David has accompanied award winning vocalists and top session musicians on recordings distributed independently and through Rounder Records. He is also co-founder of AirGigs.com, a global marketplace for hiring session musicians and recording engineers. David’s guitar playing and approach to music are deeply influenced by different styles of American Roots music and the blues in particular. As a guitarist he is mostly self-taught, learning by ear, and following the roots of popular music backward to greats like Django Reinhardt, Robert Johnson, Charlie Parker, T-Bone Walker, Muddy Waters, Duke Robillard, Hollywood Fats and many more. These days David spends his time writing for TV, Film & Radio projects, producing his own original projects, teaching, and performing. Holly
Read More
Tons of great materia Review by unprepped on 11 Jan 2020review stating Tons of great materiaDavid Blacker is an amazing teacher. Explains every note of this comprehensive course. A huge amount of theory presented in a simplified manner. This is one of my favorite course on truefire and I probably own 75% of the courses they have released.