Sister Rosetta Tharpe (March 20, 1915 – October 9, 1973) was an American singer, songwriter, guitarist, and recording artist. She attained popularity in the 1930s and 1940s with her gospel recordings, characterized by a unique mixture of spiritual lyrics and rhythmic accompaniment that was a precursor of rock and roll. 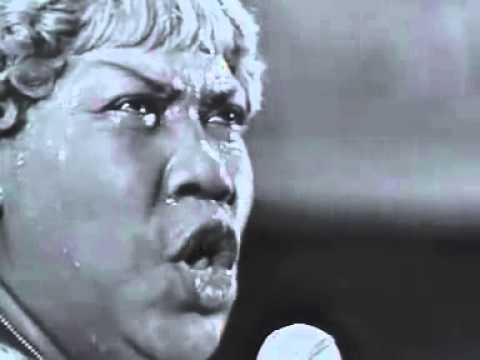 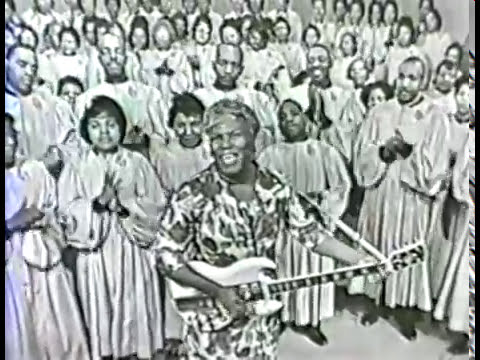 Up Above My Head

She was the first great recording star of gospel music and among the first gospel musicians to appeal to rhythm-and-blues and rock-and-roll audiences, later being referred to as “the original soul sister” and “the Godmother of rock and roll”. She influenced early rock-and-roll musicians, including Little Richard, Johnny Cash, Carl Perkins, Chuck Berry, Elvis Presley, and Jerry Lee Lewis.

Tharpe was a pioneer in her guitar technique; she was among the first popular recording artists to use heavy distortion on her electric guitar, presaging the rise of electric blues. Her guitar playing technique had a profound influence on the development of British blues in the 1960s; in particular, a European tour with Muddy Waters in 1964 with a stop in Manchester on 7 May is cited by prominent British guitarists such as Eric Clapton, Jeff Beck, and Keith Richards.

Willing to cross the line between sacred and secular by performing her music of “light” in the “darkness” of nightclubs and concert halls with big bands behind her, Tharpe pushed spiritual music into the mainstream and helped pioneer the rise of pop-gospel, beginning in 1938 with the recording “Rock Me” and with her 1939 hit “This Train”. Her unique music left a lasting mark on more conventional gospel artists such as Ira Tucker, Sr., of the Dixie Hummingbirds. While she offended some conservative churchgoers with her forays into the pop world, she never left gospel music.