If you have to name one person as being the originator of the modern jazz guitar style, it would have to be Charlie Christian. He was also the first musician to popularize the electric guitar as a lead instrument. Christian was an important early performer on the electric guitar and a key figure in the development of bebop and cool jazz. He gained national exposure as a member of the Benny Goodman Sextet and Orchestra from August 1939 to June 1941. 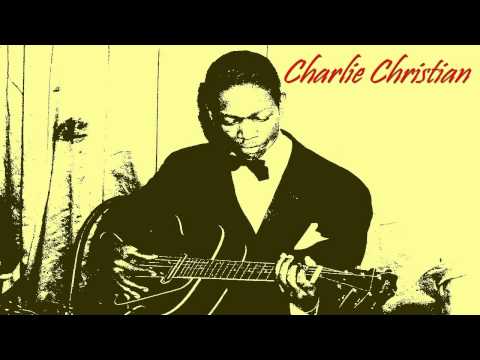 Solo Flight
3
Blues In B

Today, the electric guitar is a central instrument in rock, jazz, and other forms of popular music, and it seems like it´s always been that way. However, this actually wasn´t always the case. Someone had to bring the guitar out of the shadows and into the spotlight in a major, revolutionary way. Someone had to redefine the six stringed instrument´s role, and make music lovers see its potential as a lead instrument capable of producing single note melodic passages and solos. People who know the history of American popular music will be quick to tell you that Charlie Christian was the person who did this.

The guitar that Charlie Christian played was the Gibson ES 150, the first commercially available standard electric guitar (there had previously been custom made instruments and electrified lap steel guitars). This was a hollow body ´Spanish style¨ (the ´ES´ stands for Electric Spanish) guitar that was equipped with an electromagnetic pickup and a single volume knob.

The increase in volume and the far more robust tone afforded by the Gibson ES 150 intrigued a young Charlie Christian when the instrument was released in 1936. Then 20 years old, and the youngest son of an extremely musical family, Christian had already had two years of professional experience playing the guitar in jazz ensembles. However, his musical function as guitarist in these groups basically consisted in ´comping´ — a style of playing guitar where the guitarist mutes the strings with his strumming hand, and plays chords rhythmically in such a way that the guitar ¨locks in¨ with, and accentuates the drums and bass.

Previous to 1936, and the release of the Gibson ES150, a guitarist had always been a member of the rhythm section. However, the new possibilities enabled by electrification allowed Charlie Christian to see the guitar differently. Christian admired the playing of tenor saxophonist Lester Young, and he was now able to solo with his guitar in the same way that players of horn instruments were able to.

The big break for Charlie Christian came when he became a featured player in the big band and ensembles put together by Clarinetist and famed band leader Benny Goodman. Goodman was instrumental in breaking the ´colour barrier´ and being the one of the first major names in jazz to play with black musicians such as Teddy Wilson, Lionel Hampton, Gene Krupa, and Charlie Christian.

Unfortunately, Christian died in 1941 from tuberculosis. However, the recordings he made in with Benny Goodman and others during his short career, paved the way for successive generations of guitarists, especially those who would play the electric guitar. The Best Of Charlie Christian

A Step-by-Step Breakdown of the Styles and Techniques of the Father of Modern Jazz Guitar (Guitar Signature Licks) This book has been around for many years and was transcribed by Wolf Marshal, one of the best teachers of this style. You will find these transcriptions to be very accurate and is also receives 5 star ratings on amazon.

Swing to Bop: The Music of Charlie Christian

The author has compiled 39 precise solo transcriptions (in notation only), as well as a thorough analysis of each. There is also a complete how to section that is a book in itself. The author has recorded each transcription in slow and fast versions. The book contains some of Charlie’s best work including the Jam Sessions at Minton’s, John Hammond’s Spirituals to Swing concert and the Celestial Express Blue Note Recordings. Charlie Christian was the first to popularize the use of the electric guitar in jazz. He was the pioneer who led the way. Includes access to online audio.