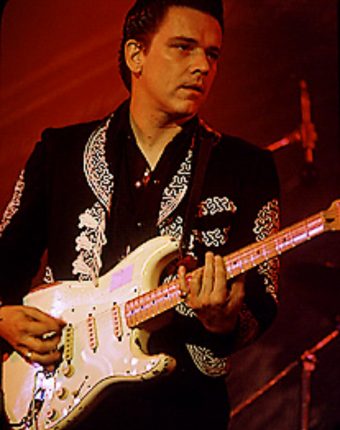 Several notable blues guitarists have had a significant influence on Vaughan’s playing style including the “Three Kings” (Albert, Freddie, and B.B. King) and Johnny “Guitar” Watson.

Jimmie Lawrence Vaughan was born on March 20, 1951, in Dallas County, Texas, to parents, Jimmie Lee Vaughan and Martha Jean Cook. Raised in Dallas, Texas, Vaughan moved to Austin in the late 1960s and began playing with such musicians as Paul Ray and WC Clark.

In 1969, Vaughan’s group opened for The Jimi Hendrix Experience in Fort Worth, Texas. It was at this show that Vaughan lent Jimi Hendrix his Vox Wah-wah pedal which Hendrix ended up breaking. In return, Hendrix gave Vaughan his own touring Wah-wah pedal.

Jimmie Vaughan developed his own easily recognized personal style. He formed the band The Fabulous Thunderbirds with the lead singer Lou Ann Barton and harpist Kim Wilson, bassist Keith Ferguson, and drummers Mike Buck and Fran Christina. (The original Fabulous Thunderbirds were all protégés of Austin, Texas blues club owner Clifford Antone). The band’s first four albums, released between 1979 and 1983, are ranked among the most important ‘white blues’ recordings.

These early albums did not sell well, so the band was left without a recording contract for a couple of years (during the time when Vaughan’s younger brother achieved commercial success). During this time, Vaughan played lead guitar on fellow Texas blues musician Bill Carter’s 1985 album, Stompin’ Grounds, also playing Carter’s most well-known song, “Willie The Wimp”, which would be introduced a year later to Stevie Ray Vaughan and played on live albums.

Jimmie and Stevie Ray Vaughan-two sons of Texas whose pyrotechnic guitar work introduced an entire generation to the blues-are given full biographical treatment by a writer who tracked their careers for five years, until Stevie Ray’s sudden death in 1990, and afterward as Jimmie pursued a solo career that continues to flourish.